Peace demands its price in blood.

Jaantzen may have brought stability to the city of Bulari, but not everyone’s grateful. Allegiances are shifting sand, and he’s made a miscalculation that earned him a deadly new enemy — one who plays a viciously different game than the one Jaantzen is used to winning. Jaantzen and his crew fight to gain the upper hand, but secrets buried in shallow graves are coming back to haunt them. And as Starla and Toshiyo edge closer to understanding the growing mystery that’s been dropped in their laps, their search is awakening darker things than any of them can imagine. Peace comes at a price, and this Pax Bulari could cost Jaantzen everyone he loves.

PRESSURE POINT is the third book of Jessie Kwak’s Bulari Saga, a fast-paced series of gangster sci-fi stories set in a far-future world where humans may have left their home planet to populate the stars, but they haven’t managed to leave behind their vices. And that’s very good for business. For fans of Firefly, the Godfather, and the Expanse.

There are no reviews yet.

Be the first to review “Pressure Point” Cancel reply 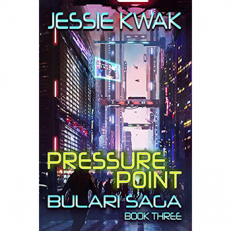