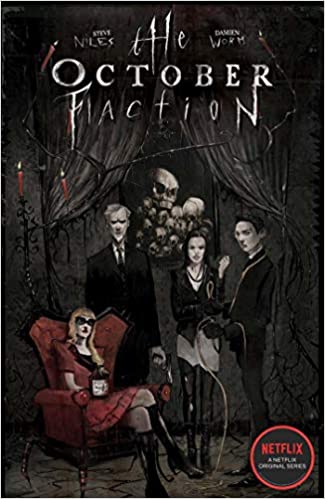 Faction is defined as a small group dissenting in an organization. The Netflix series and the IDW publications are definitely factions of each other.

On January 23, 2020, Netflix premiered the October Faction. The series is created by Damian Kindler and based off of the comic or graphic novel by Steve Niles and Damien Worm.

I saw a tweet supporting the lead actress Tamara Taylor and the show, I  watched the trailer and looked forward to watching it. I am all about that supernatural/speculative fiction life, and it starred a black woman and kids. It starred Tamara Taylor and J.C. Mackenzie as the leads, Aurora Burghart and Gabriel Darku as the kids.

In my own words, this is what I understand from watching. Fred and Delores Allen hunt the supernatural, they are very good at what they do. They work for an organization called Presidio. Their kids Geoff and Viv are twins very smart children but have no idea what their parents do for a living. Fred was raised in a monster-hunting family and does not want to mess his kids up the way his parents messed him up. Delores and Fred knew each other in High School but didn’t necessarily interact with each other. After Delores’ s father, the Sheriff, was killed in “an animal” attack. They bonded. Fred’s family is all kinds of dysfunction and its malaise kind of spirals out into the whole town. The Allens are the richest people in the town of Somewhere-on-the-Hudson. Townspeople love and hate that fact.

Geoff and Viv are interesting kids. Due to the fact that they constantly move around from school to school, because of their parents’ job. They have developed two different kinds of personalities. Geoff seems to be outgoing. Viv appears cautious of her surroundings. It is easy for Geoff to make friends, for Viv not so much. However, they love and get along with their parents.

Their school life is disrupted yet again, first because of the death of Fred’s father, I forgot the name they used in the show, so I’m calling him Old Man Allen [1]. Then the fact that their parents decide to stay in the town they hate for personal reasons. Fred is facing burnout or a mid-life crisis. Delores wants to resolve her high school past. Outgoing Geoff has popularity issues and awkward Viv becomes the bait for the town’s mean girl. Adjusting to this new town and school is complicated.

Of course, not knowing the world they live in, the children unleash something dangerous and supernatural. Once Geoff and Viv realize what their parents do for a living, they become conscientious objectors. The trusts of their parents go right in the mansion’s fireplace.

There is another subplot of Old Man Allen not really being dead, the organization is turning against the Allen family. A man/machine haunting the woods of Somewhere-on-the-Hudson. Viv bonds with the creature because he saved her from a nice-guy rapist.

Mrs. Allen [1], Fred’s mother comes back into their lives. She can only be described as a sassy no-fucks-to-give older lady. It seems Fred had an older brother that died when he was a senior in high school. After that Old Man Allen forgot about his wife, he barely tolerated Fred his second son.

Secrets come to light when the dangerous supernatural turns out to be Viv and Geoff’s biological mother, a warlock. The reason Fred was hell-bent on not letting the kids know about Presidio is not only because of his shitty upbringing, but they would also be on the hunted list. It may seem that Delores wanted to tell the kids the truth and train them for their own protection.

The organization turned on the Allen family at the same time the warlock takes the kids. There is also a monster organization hunting the warlock. Delores and Fred’s hunting caught the attention of the local sheriff, a high school friend of Delores.

Things happen and what we were told at the beginning of the show is not what becomes the truth in the end. It is too much to go into detail. I have written too much as it is.

My overall opinion of the show is that it is worth watching despite the issues and threads that annoyed me. I won’t say it is binge-worthy, which is sad because I wanted it to get that binge-worthy status. I don’t think it is hated like Bright, but I don’t think it was as liked as the Umbrella Academy or Witcher. I have come across three YouTube video reviews.

Now let me tell you about The October Faction by Steve Niles and Damien Worm. It was brought to my attention because of the Netflix show. I only read volume 1. I haven’t got into the mystery that is stirring up to be exposed in future books. I enjoyed it a lot better than the Netflix show. Here are my reasons. Geoff and Viv know about their father’s previous job as a monster hunter. Fred Allan has retired from that life and he now teaches about the occult and monstrum at a college or university. He is still burned out and possibly going through a mid-life crisis. What Delores does besides raising the kids and knowing what Fred did in the past is not explained in this first book. What is explained is that there was a rut in the marriage. Delores did some unauthorized investigations that got her beat up. She unleashed a teenage boy/machine being, who wanted to kill her husband. Fred is made aware of all of this by a friend who is now a werewolf [2].

Geoff and Viv are not twins. Geoff appeared to have graduated and Viv is in her senior year of high school. She is still awkward and hates high school. These kids both know about the supernatural and they are enthusiastically interested in it. Viv still kind of bonds with the Robot face boy. It is obvious that Geoff and Viv have abilities, like being mediums and seeing dead people. Geoff has unsettling interactions with High School football star Phil or Philip [3].  Geoff can see dead people that are hanging around Phil like drapes. It seems the whole Allan family can see it.

The October Faction is a book about a family of “orphans” coming together. The Robot boy was hell-bent on killing Fred and he was fine with that. He believed he took care of a more serious threat but that is relieved to be false. There was something more sinister conspiring against the Allan family. Geoff and Viv want to be trained in the family business. They have worn Fred down and he has seemed to agree. Fred and Delores’ marriage may have been at risk but after her attack. They have seemed to mend it a bit.

The October Faction of the comic is a chosen family, who agree to work together for the family greater good.

The artwork is dark. Someone tweeted that it reminded them of Tim Burton’s films, and I have to agree. There was a macabre tone throughout the book. The living character appeared like they were sickly; they were pale and lackluster expressions. The dialogue is what kept everyone alive.

So, which is better? Honestly, I am on the fence on that issue. Both have value. In fact, one led me to the other. The Netflix show had a diverse cast. I was happy with female representation, the heroines and villainesses. I was annoyed with the whole high school representation, the tropes were overdone, awkward former friend girl to mean girl, closet gay jock. It seemed like every character has a reason for their behavior and it was the twins who got to decide what was acceptable and what was not. This could be a response to being older.

The book series may have more diversity, for women, there is only about Delores, Viv, a creepy henchwoman and her mention mother, in volume one. Fred Allan’s partner Lucas is a black man and a werewolf, and the local sheriff also looks like a black man. There is a mystery brewing and I was almost compelled me to buy volume 2, alas I had to also get things like groceries. It will be worked into my budget, next month. I will also like to see a season 2 to the Netflix October Faction.

P.S. check out the side notes below

This isn’t my first time at the rodeo. Well, actually I have never been to a rodeo. I’m an east coast girl. I write fiction and I want to post it here. In between, there will be essays on other subjects of interests. This is what I tell you all, I’m a mother, a daughter, a feminist, a Christian all these things allow me to write. View all posts by JC Henry 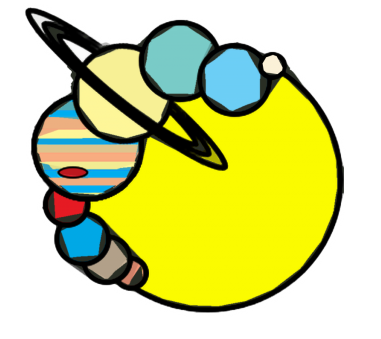 A curated book box above all others 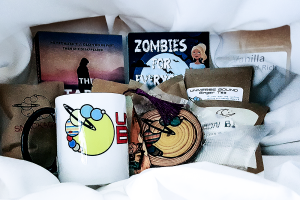 A curated book box of diversified authors, subjects, and genres. We love sci-fi, fantasy, mystery, and thrillers! We strive to include a diversified selection of authors (POC, own voices, female authors, LGBTQ+) and subject matters. The majority of our books are for Adults, however, we’ll find a YA/NA book so good it has to be included.